On 17th September, selected group of eight Lithuanian designers will depart to London, where they will demonstrate their creative muscle. This is the first time when a united group of Lithuanian designers will introduce their products and concepts at the cult design event “100% Design”, which is held at Earls Court Exhibition Centre during the very height of The London Design Festival. London is one of the most important spots on the map of industrial design, and “100% Design” is the biggest modern design event in the United Kingdom, every year attracting tens of thousands of design creators and their fans from all over the world. Doubling this year’s impact is the fact that “100% Design” is celebrating its 20th birthday this year, so its hosts are expecting to attract even more creators, buyers and producers of design.

An increase in design’s importance has been noticeable for several years now in the fields of creative work, business, technologies and innovations, and this is a wonderful opportunity for Lithuanian designers and producers of design to show themselves in an international context, thereby establishing business contacts, introducing Lithuania to the wider world, and perhaps, even becoming famous. At certain points in time, “100% Design” has helped to bring fame to such world-renown designers as Tom Dixon, Simon Pengelly, and the design duos of Barber Osgerby and The Azumis – the career trajectories of the above changed completely after their respective shows at the London Design Festival.

In the pavilion designated to Lithuania, “DESIGN LITHUANIA 2014 / LONDON“, it will be possible to see design objects featuring innovative design solutions that have received prestigious international design awards, as well as Lithaunia’s national prize, Good Design. Visitors of the exhibition will have a chance to see what Lithuanian designs look like – which is, in most cases, inspired by nature – and to get acquainted with high-quality wood design and the most recent innovations in associated technologies.

In the display it will be possible to see objects recognized by international awards like Red Dot and iF, which are considered to be the Oscars of design; these include the self-organising desk by Inesa Malafej, “My Small Writing Desk” (2013, manufactured by EMKO), and the conceptual desk “Working Desk” (2013, Vilnius Academy of Arts), by Aušrinė Augistinaitė. These will be accompanied by Arūnas Sukarevičius’ “My Reading Chair”, with pockets (2012, manufactured by EMKO); it consists of a wooden frame and a textile “robe” which can be changed depending on the whims of its owner, ranging from a modest jacket to a punk-rock one.

The Lithuanian design company Sedes Regia, which is famous in Europe, will introduce its newest product designed by the designer Darius Juškevičius – a tuffet called “Pooch” (2014); this new piece of furniture can serve its owner in various ways: it can be a bench, a small desk, or a chair useful for resting one’s legs on after a long day, and it can also hold a raincoat, bathrobe or snacks. There will also be four handmade design objects from Šiauliai, created by the prolific designer Edmunas Kasčiukaitis (2013-2014, produced by Inscoco): the modern-design armchairs “Loxodonta Africana” and “Tettigonia Viridissima”, the wooden rack “Mantodea”, and a truly unusual lamp inspired by films and museums – “Lucerna”. 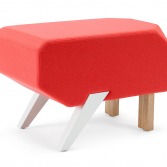 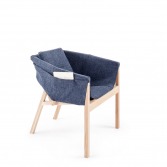 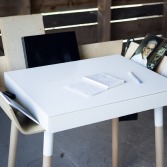 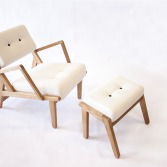 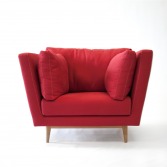 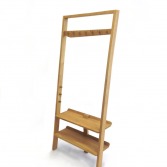 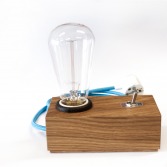 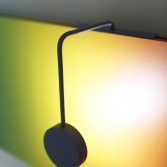 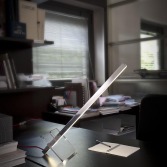 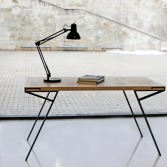