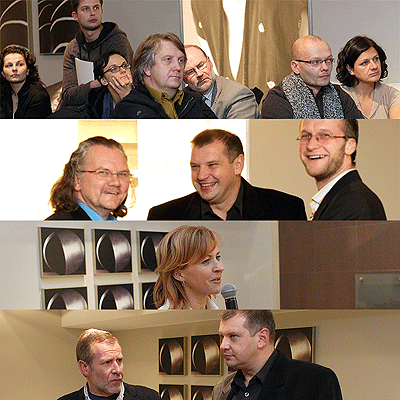 According to LDF Board member Vytautas Gurevičius for a long time masters of the interior language talk about common problems and their solutions, because of that the organization’s objectives are: to raise the prestige of the profession and educate the public about the interior, as well as raise Lithuanian interior design and marketing culture. The newly founded club will organize training and educational trips, will take care of dissemination of information, public relations, will organize professional competitions, exhibitions, workshops, will ensure the maintenance of professional ethics and expertise. Club will participate in the activities of interior design professionals in their work contributing to the organizations’ listed objectives. “Interior club” activities will be conducted project-based.

Lithuanian Design Forum Director Marius Dirgėla presented next year “Design Week”, held in 2009 May 15 to 25 days and event plans. The organizers have already received a lot of interest from visitors and participants and promise that the 2009 Design Week will be longer and more intense than last year event. Many talked about a new, intriguing Lithuanian Design Forum project “Design for All”, which is an integral part of Vilnius – European Capital of Culture Programme of the European School of Arts’. “Design for All” will also start on May 15 based on variety of forms – workshops, lectures, and exhibitions – will last until October.

Interior profesionals from now decided not only to share concerns and ideas, but to work together for public, profession and beauty interest.