At the meeting, Günter Verheugen stressed the European Commission’s full agreement with the positioning of design as a “very crucial element” for European competitiveness. “Europe must maintain its position as the most competitive region in the world as far as design is concerned”, said Vice-President Verheugen. 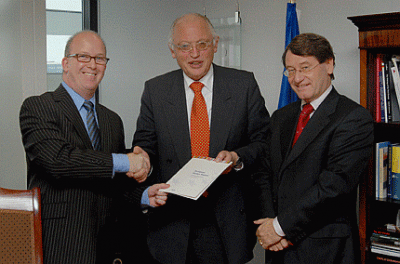 The European Commission will issue a Communication on design to be published during the European Year of Creativity and Innovation in 2009. This non-legislative policy document is aimed at the other European institutions, notably the European Parliament and the Council of the European Union, and will include guidance to EU Member States on national design promotion strategies in addition to other measures to support the growth of Europe’s design industries and to stimulate the wider adoption of design by Europe’s 23 million Small and Medium-sized Enterprises.

The Commission will reinforce its efforts to build up a knowledge base for design activity and design policy in Europe. The European project ADMIRE, supported by the Commission under PRO INNO Europe, is currently conducting a mapping study of design and design management in Europe. This information will be complemented by data from existing tools such as the INNO-Policy Trendchart, the Innobarometer and the European Innovation Scoreboard, which will give design a more prominent place from 2008 onwards.

The Commission will ensure the existence of a permanent body for a dialogue on design policy as a key component of Europe’s innovation policy, within the context of achieving the goals of the Lisbon Strategy for Growth and Jobs.

BEDA was established as an Association of Associations in 1969. It currently has 42 members in 23 Member States comprising representative professional design organisations and national design promotion centres. Its role is to communicate the value of design and innovation to the institutions of the European Union.

BEDA was established as an Association of Associations in 1969. It currently has 42 members in 23 Member States comprising representative professional design organisations and national design promotion centres. Its role is to communicate the value of design and innovation to the institutions of the European Union.

The ADMIRE project was launched in January 2007. ADMIRE aims to encourage companies – especially SMEs – to introduce design management procedures in order to improve their competitiveness. To this end, the ADMIRE project intends to stimulate innovation, establish a European knowledge-sharing platform, organise the European Design Management Awardand to identify and test new activities to promote design management.