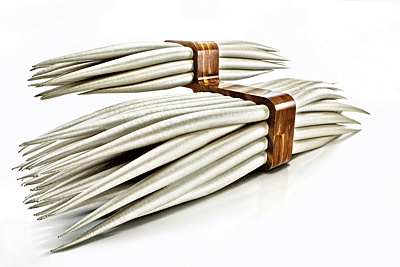 Competition in Riga Grand Prix grand prize was appointed to the company “Sedes Regia” and designer Jonas Jurgaitis for very original piece of furniture “Alien”. J. Jurgaitis say that this is news to Earth’s population from alien who abducted designer. Similar to J. Brundza work, J. Jurgaitis piece of furniture does not look very comfortable to use, but opinion changes when you try it. Jury member Villa Poggi of Estonian designers Union Board acknowledged that nothing like this has never yet seen: “This is a completely new approach, and so easily overcome simple interpretations of old ideas.”

“Alien” is made from a special cloth coated with polyurethane foam “dreadlocks”, joined by very high-quality laminated wood piece. Next to the standard version there is “Aliens” with light glowing LEDs and Swarovski crystals adorned.

“Auga” is produced in two variants – from laminated birch plywood and plastic, which requires less manual work and therefore more accessible to a mass customer.

The Baltic furniture manufacturers design contest was organized at the thirteenth international furniture and interior design exhibition “Baltic Furniture “, which was held October 2-5 Kipsala Exhibition Centre. Organizers of the contest – BT1 and Association “Latvijas mēbeles”. Many of the participants from Lithuania was exhibited as “Lithuanian design team”. The project was organized by the Association “Design Forum”. Exposure curator Marius Dirgėla said: “The reaction we received from the Latvian public and the jury of professionals, confirmed that Lithuanian design “common denominator” search is in the right direction.”

The other two categories – the unique designs and design ideas – won the Latvian workers. Staņislavs Kacs, Pēteris Ozoliņš and company “Design House created a chest of baroque forms “4Vase”. Winner of the “The best is yet unrealized ideas” nomination was designer Aigars Meždreijers for hallway system “Wave” created for company „Feidi“.