The BEDA GA+, an additional day during the General Assembly, was initiated in Milan in 2015 to allow members to share their experience, discuss current challenges in design and encourage closer collaboration. In 2017 the GA+ evolved into the first BEDA European Design Forum with the aim to open up to broader audiences and the ambition of becoming a central design event in Europe.

Participants representing 19 European countries gathered in the historic city of Vilnius to debate and shape the future of design support in Europe. The event was hosted by the Lithuanian Design Forum just after one year of being a BEDA member, on June 8-9, 2017. 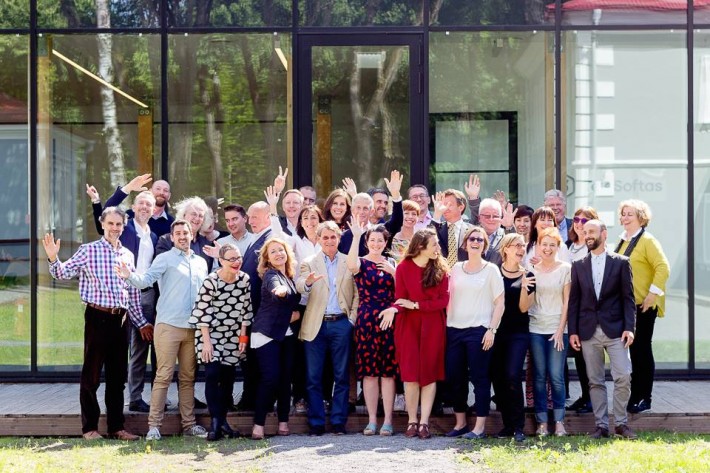 The opening speeches by John Kampfner, CEO of Creative Industries Federation, and Olivier Chassagne, Policy Officer at the European Commission’s Directorate General for Internal Market, Industry, Entrepreneurship and SMEs (DG GROW), set the tone for the day. John talked about the significance of the creative industries for the economy and the special role that design have in connecting professions and sectors. His statement that “Design is the 21st century business model” resonated with the audience and was repeatedly quoted throughout the day. Olivier, shared the European Commission’s lessons of design value emphasizing its creative potential, focus on user and ability to simplify complex technologies. Building on John’s call for interdisciplinary collaboration, policy officer from DG GROW encouraged cross-fertilisation between sectors.

Design stakeholders across Europe share a lot of common challenges in engaging with government and broader public sector, and BEDA provides a perfect platform for learning how to overcome them and acting together on the European level. Cooperation was a recurring theme, as working in silos fundamentally limit our power to influence policy.

In the times of economic uncertainty, design organisations must look at the alternative sources of revenues. During the session dedicated to financial side of design support, the delegates had the opportunity to gain an understanding of three distinctive funding models for design, namely crowdfunding, venture capital and royalties’ redistribution schemes.

Having learnt the results of the ‘Membership Benefit Survey’, commissioned to map the existing benefits and services delivered by professional designers’ associations and to better understand the expectations of their members, we co-created a series of ideas for the identity, role, strategy, offer and external relations of BEDA in an interactive workshop. The outcomes will be analysed by the Membership Benefits Cluster to produce recommendations for advancement of BEDA’s position.

© Lietuvos dizaino forumas, 2006-2021 m.
Back To Top
Please note that this website uses cookies to improve your browsing experience. If you agree, click the "I Agree" button. You can cancel your selection at any time by changing your web browser settings and deleting your saved cookies.